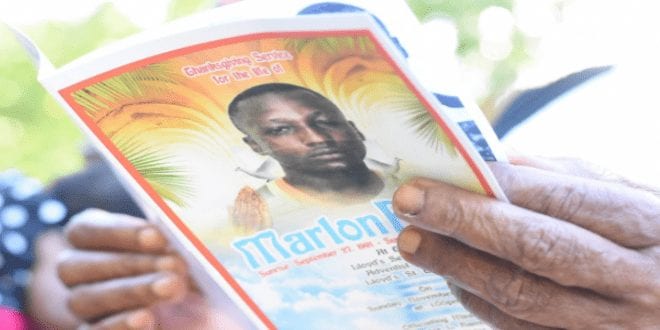 sharetweetWhatsapp
PinterestDiggLinkedinRedditStumbleuponTumblr
Share
The funeral service of Duppy Film, Jamaica’s most wanted man prior to his death was held on Sunday (Nov 12) at the Lloyd’s Seventh Day Adventist with interment in the cemetery in the district.

The service reportedly lasted only 30 minutes, as Pastor Linton Hamilton used the time to counsel the congregation about taking the wrong path in life and the consequences

The short proceedings were incident free as a strong detachment of police was present at both the church and the cemetery.

Marlon ‘Duppy Film’ Perry was shot dead by police at a guest house in Port Morant, St Thomas on September 24.

Duppy Film’s Family Struggles To Bury Him,…”mi would a want to send him off in a chariot”