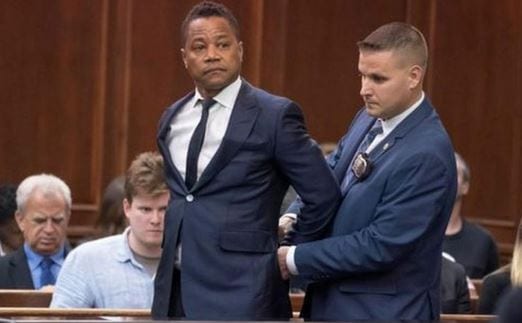 Cuba Gooding Jr. touched the thigh and breast of a woman who is accusing him of groping. Everything he did was caught on the surveillance video, but his lawyers are not saying the same thing as the police.

Gooding and his girlfriend Claudine De Niro were sitting together in the Magic Hour Roof Top Lounge in New York and the accuser sat beside them. In the video you can see Gooding reaching over his girlfriend and touches the accuser on her left thigh, before he moves his hand up to her breast, the accuser then puts her hand on his and then, the hands are moved towards his mouth and he manages to kiss her hand.

A man walks over and stands before them and puts his hand on Gooding’s shoulder and the accuser then leans towards the group and it seems like she starts talking.

The man starts gyrating so that all eyes would be on his crutch and each person talked the guy takes a drink from Gooding after he and his girlfriend seemed to be playfully pawing at the guy’s crotch.

More persons joined the group and then each person went to another section and not long after; there is an argument.
Approximately 30 minutes after Gooding and Claudine were making out on a couch that was next to a man when the accuser went over and started arguing. Cuba got up and stumbled before he regained his balance and walked away and his girlfriend with the man who was a security followed him.

Gooding was arrested on Thursday; he was charged for sexual abuse in the third degree and misdemeanour forcible touching. His lawyer said, he saw no criminality on Cuba’s part when he watched the video.

Cuba said, “he believed the surveillance video would show what really happened, and that’s the most important thing.”

See more details from the video below

Previous If 2 Is a Company 3 is a Crew, What’s 4 and 5?… Trick Questions Ocho Rios, REVISIT [Video]
Next Trailer Load A Gal… Carnival Costume Fashion Show [Video]