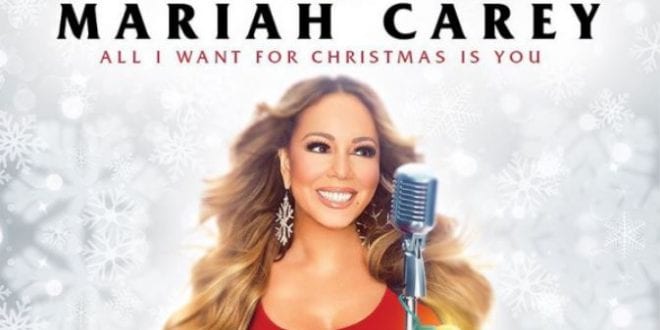 All I want for Christmas is You, Mariah Carey’s Hit at No. 1 on Billboard Hot 100 after 25 Years

It has been twenty-five years since Mariah Carey released her album and called it “Merry Christmas” it was her first-holiday Album and she really wanted a number one single, and she finally got it.

The 10 track album was her 4th studio release, and it included covers of Christmas classics such as “Silent Night”, “Joy to the World”, and Santa Claus is Coming to Town” and 5.6 million copies were sold by December 2018, it was also certified platinum six times, no one knew it would do so well.
[Sharingbuttons]

The multiple Grammy Award winning Super star re-released the album in November 2019 in order to celebrate its silver jubilee and the move has paid off in a huge way. The single “All I want For Christmas is You” which was the third release in 1994 has racked up a number 1 single, after 25 years.

Carey has a number 1 hit on her hands, it is her 19th number 1 song on the charts, and it’s the first time the track has ever hit this specific chart. American’s are unable to resist a Christmas jingle when the snow falls and “All I want for Christmas is You” seems to be the perfect mix of Christmas and love.

“All I want for Christmas is you” was streamed on digital platforms 45.6 million times in the US last week. That made the song move from third place to the top spot.

Proving that Americans can’t resist a Christmas jingle once the snow starts to fall, “All I Want for Christmas is You” was streamed 45.6 million times in the United States during the last week alone.

The consistent streaming propped the single from being a shiny ornament in third place on the figurative Christmas tree, to the angel on top.

Mariah took to Twitter and showed how overwhelmed she was, “We did it” she wrote and followed that with Yuletide-related images and a crying emoji.

Watch the music video below