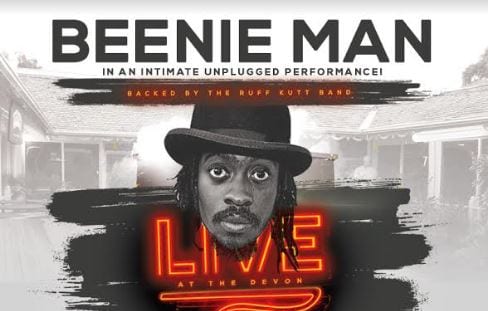 Beenie Man set for ‘LIVE AT THE DEVON’… This Thursday, November 16th

sharetweetWhatsapp
PinterestRedditStumbleuponTumblr
[Sharingbuttons]Willcom Creative and SMA Talent Jamaica has announced the rescheduling of the ‘Live At The Devon’ Series launch event with feature act Beenie Man this Thursday, November 16th. “The highly anticipated live music series was slated to begin last week Thursday, however, due to the inclement weather affecting the Island we had to postpone to this Thursday” stated Chad Williams.

With a stellar catalogue and undeniable showmanship to his credit, the
dancehall doctor Beenie Man will take center stage “Live At The Devon”
this Thursday, November 16th for an intimate unplugged performance at
the Reggae Mill Bar in Devon House.

The event which is the first in a new series of live stagings being
organized by Willcom Creative and SMA Talent Jamaica will give live
music lovers a chance to enjoy some of their favorite artists like
never seen before.

“The whole concept behind “Live At The Devon” was to showcase Jamaican
entertainment in a different, unique way and to bring the fans closer
to the artists and their art, a lot of times patrons are forced to
enjoy a performance from a distance in a stage show environment, this
is not that. We wanted to tailor an event for those who wanted a more
intimate experience. For our first staging we decided to showcase
Beenie Man not only because of his extensive catalog but he is a
master performer, one of the best in the business.” stated Chad
Williams.

Presold tickets for the event are currently on sale for $1000 at the
Reggae Mill Bar or $1200 at the gate with showtime slated for 9PM
sharp.
SOURCE:C. Williams