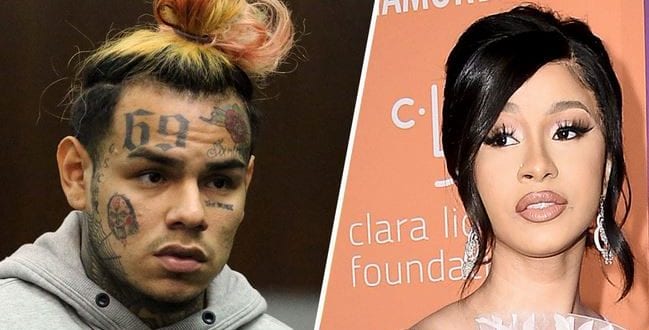 Tekashi 6ix9ine has been giving critical testimony in the trial of the former Nine Trey Blood gang members to which he was connected. He is now an outcast and he has added Cardi B’s name to the list of names he has been calling.

The rapper stated that Cardi B is known as a Nine Trey Blood gang member, and she responded by using a popular meme to drag him for name dropping her when he was giving testimony.

Over the past three days. Tekashi has been divulging information on the gang and has name dropped other rappers, such as Trippie, Redd, Cassanova and Jim Jones.

Tekashi responded to questions that were asked by the defense team, during his cross-examination. He said he knew Cardi B was a member of the gang and she made music videos with Bloods in the background.

He also confirmed that Cardi B wore Blood colours to show her allegiance to the gang. He also said he didn’t pay much attention to what she did to get famous, he only knew who she was.

Cardi B posted memes on her Instagram page when she heard his testimony, one of them was of a woman saying “what? What’s going on?” and then captioned “MOOD” with an emoji that rolls the eye.

The other meme was the funniest, it was of Keke Palmer the actress, saying “I hate to say it, I hope I don’t sound ridiculous I don’t know who this man is, I mean he could be walking down the street I wouldn’t ,I wouldn’t know a thing. Sorry to this man.” Two hours after the meme was posted it had 1.7 million views and many celebs has commented on it, such as Lala, Marsai Martin, Lil Yachty, and Keke.

Fans began the rappers snitching had no limits and no end. Fans are now saying Tekashi should have displayed this energy when he took the stand, but if he did, he could have rotted in for the rest of his life in prison.