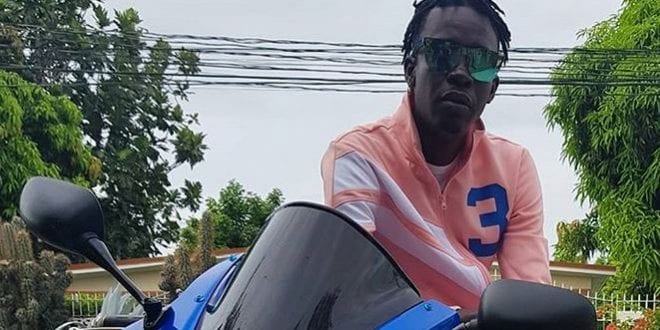 Chi Ching-Ching has moved up from being a dancer to street slanger to becoming a recording artiste as he has released his first album “Turning Tables” and he is now doing promotion.
Advertisement

In a recent interview the entertainer revealed that he used the title “Turning Tables” as he believes his earning table has finally turned and he is coming out of a situation where he had nothing and now he has something. He is feeling good about his accomplishment because those who have something will never know how good it feels to go from having nothing and still finding a way to have something.

Chi Ching spoke about his single “Way up Stay up” and his plans to put out an EP and how he met Shawn Paul, the heavy weight in the music business, who showed him how he could do an album, and he also produced the album on the Dutty Rock Production label.
Chi Ching said “Shawn Paul liked his music and decided to assist him in many ways, he is grateful for the fact that he has been with him in New York when he does interviews on radio stations and all the ways in which he is getting help to move his music career forward,

This debut album is doing well, he is getting a lot of new fans and music fans who wanted to see what he has to offer can have something good to listen to at last. The album has 14 tracks and 4 skits. There are many other artistes on the album, such as Stone Boy from Ghana, Shawn Paul, Bounty Killa and many more artistes. The album is mixed with Edm, dancehall, Hip Hop and dance songs for the people who love to party.

A new video was released for “Rope” a song that is on the album, the scenes on it were shot in Port Royal, Jamaica. Fans are liking it a lot, as there are some dancers in it and they are doing a lot of dance moves.