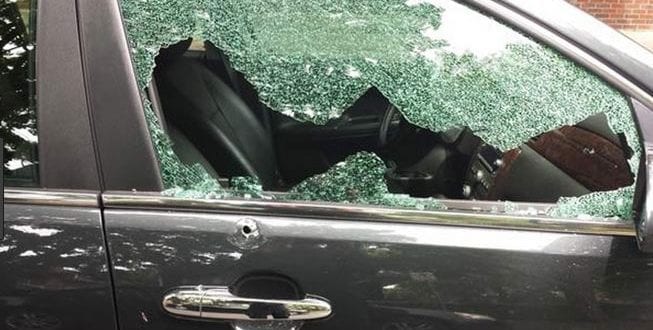 Unnamed influential entertainer in dancehall is giving the almighty thanks after narrowly escaping a shooting incident with his life last Evening.

Although still shaken by the incident, he said that he is lucky to be alive after the car he was traveling in was shot up by unknown assailants.

The entertainer went on to show his car With the bullet-riddled in door and broken side windows, the traumatized DJ recalled the moments when he thought that this would be the end of his life.
[Sharingbuttons] “Yesterday morning me left I house in Liguanea, and I was on my way to August Town to pick up my nephew. While I was on my way going up through Mona, pass the (US) Embassy, I noticed a white Probox following me. But when me really realized say a me the car a follow, i decided not to head to my nephew, so me cut through Mona Heights and go around to the primary school and turn back round,” he said he continued to say.

“When me turn back round now, a that time them start beat bullet start pon do car. Bout seven to eight shots, I don’t even know, everything happen so fast sighs, i really was just thinking of my life. When the fright wear off, me just head straight to the August Town police station and file a report.

The entertainer said that investigators at the station took his statement and did the necessary forensics. An investigation into the shooting is now under way.