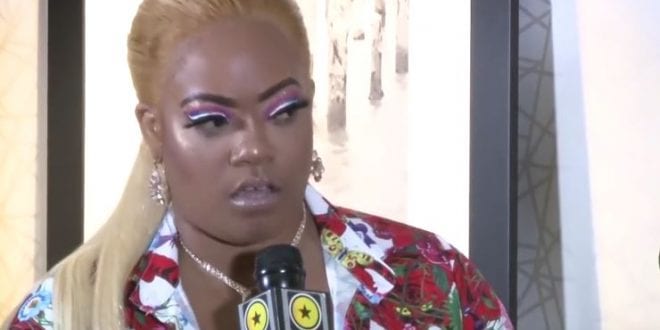 sharetweetWhatsapp
PinterestDiggLinkedinRedditStumbleuponTumblr
Share
The impact of Chozenns song on Dovey Magnums career has been very good, but she would prefer if he had used her other song about prayers, it was done when she survived an almost traffic accident. The entertainer respects Christians and Christianity and thinks the persons who are in church trying to focus on God might hear the rhythm of the “Bawl Out” song playing and start thinking about her song instead of Chozenn’s song and that wouldn’t be good.

There is a video for “Bawl Out” but it is not sexually explicit like the song, as Dovey says she wanted it to be something that the whole family can watch. The song that will follow “Bawl Out” will be quite similar as she will be singing about “Squeeze up Mi”

Dovey is enjoying the attention she is getting for her music at the moment, she has fans in the US, the UK Canada and Jamaican fans both on the island and abroad. She is very glad that her Jamaican people are supporting her career so much, even though she lives in Atlanta. She has caused a lot of persons to change their minds about not being able to buss if you are not in Jamaica when you are doing Reggae music; as she hasn’t even returned to the island since the “Bawl Out” song became a hit.

The entertainer has started touring in the US and Canada and plans to perform in Jamaica after that is done. She performed in Miami recently, and the venue was packed, they had to send some persons away, she is glad that she is getting so much support for her career and continues working hard and praying even harder. Her favorite thing to say is “Prayer we use and win”.

Putting out other songs apart from Reggae is something she has been doing as she wants to attract fans who like other genres of music as well. The jovial, outspoken and down to earth artiste seems to be determined to remain true to herself as she continues to work hard as she grows her fan base.

Dovey who still talks like a Jamaican, was born in Spanish Town, Jamaica, lived in Old Harbour Bay and went to Ocho Rios High School before she left to live in the USA. She has a small family with her boyfriend Jason, a child and a stepson and might return to the island to live one day when she can afford to live comfortably.