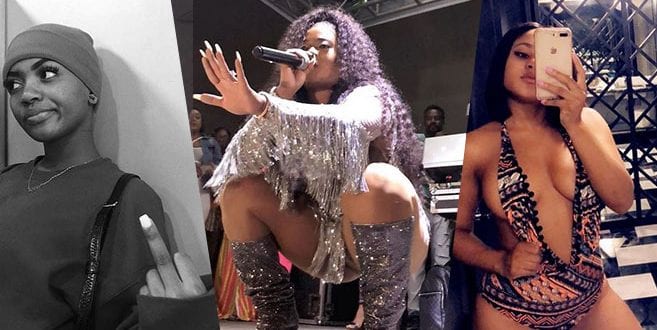 Dovey Magnum the Jamaican female artiste who lives in Atlanta planned a birthday party for herself, as she knew she would be returning to the island for the first time in 16 years. In a recent interview she spoke about her disappointment, in the way she was treated by Ishawna and Jada Kingdom who she sees as her co-workers.
[Sharingbuttons]

Dovey says she has been one of Ishawna’s biggest fans before she had the big hit song “Bawl Out”. She would call Ishawna, Ishi and she wanted to have more unity among female artistes in the music business.

Chris Diamond who helped to organize the show came up with the great idea to have an all female show.
Both Ishawna and Jada Kingdom had already given her their photos to be added to the promotional flyers, and 2 weeks before the party the 2 female artistes decided to pull out and say they wouldn’t be performing at the party.

Dovey said Ishawna said she “didn’t know that the promotion would be like what she was seeing, and she couldn’t make it.”

Jada Kingdom said “she thought she might be called for another show and one of her managers said she couldn’t perform at Dovey Magnum’s birthday party.”

The party did well, and Dovey is now saying the female artistes are fighting against themselves. She had planned to compensate the artistes and she still hopes that they can find a way to work things out in a better way in the future.