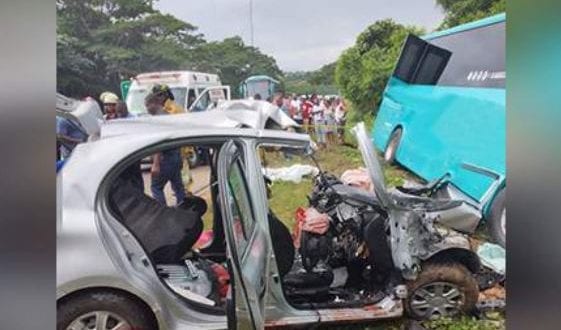 Four Die in Crash on their Way to the Airport

Two brothers were among the four men who died from the multiple injuries they received when the car they were travelling in crashed into a bus on the north coast highway in Trelawny recently.

It was reported that a woman, was being transported to Sangster International Airport in Montego Bay, she planned to board a flight to return home to Canada. She received serious injuries and was in the Falmouth Public General Hospital, where she was admitted following the mid-morning crash where she battled for her life.

All the deceased were from Port Antonio, Portland, they have been identified as brothers Omroy and Omar Russell, Everton James 22 and Dayton McLeary 24.

It was reported that, one of the brothers died while he was being treated at Falmouth Public General Hospital, while the other three passengers were pronounced dead on the spot.

The police report stated that at approximately 10:15 am a Nissan March motor car with the five occupants headed to Montego-Bay when the driver, decided to overtake a long line of traffic, shortly after crossing the traffic signals at the intersection, where the Hayes main road crosses the road to Florence Hall, and slammed into the path of the bus with two occupants.

The bus was travelling in the opposite direction, and it tumbled into a ditch at the side of the road because of the hardhit from the car.

The Jamaica Fire Brigade had to send firemen to cut the occupants from the badly crushed motor car.