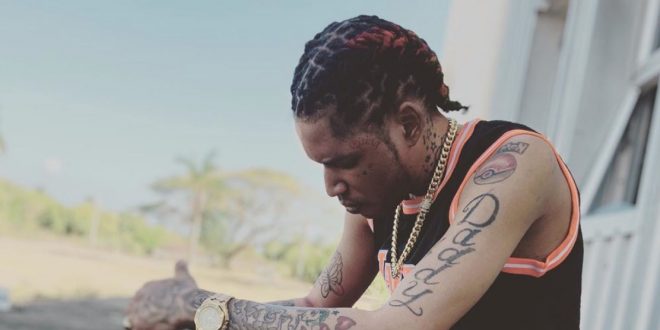 Gage Says Vybz Kartel is Giving Him a Fight, Here’s Why

Dancehall artiste Gage who last week lashed out against fellow dancehall artistes who are trending with trash music, this week is explaining his issues with his idol Vybz Kartel and a prodcer who’s name he did not mention.

Gage went live as entertainers do nowadays, to vent about the fact that he is getting taken off riddims, not because his song is not good enough but because “teach seh” don’t release his music.

Gage who seems hurt by a producer’s action stated “Unuh mek teacha tell unuh seh fi tek me offa a riddim”, seemingly the producer is contacting him to do new work but Gage’s reply was “nuh link me bout notn bredda, guh link teacha bredda” Gage made his short statement and ended the live.

Now many are speculating if this actually happened for real or Gage is looking a hype.

Last week Gage stated that only Dexta Daps and Masicka’s songs are worth listening to out of the other 48 songs that were trending “mi nuh know wah else deh pan youtube fi listen to” he explained.

On the other hand, Gage is bleaching again? Several months ago gage was black, now he is back to looking how he did a couple of years ago, see picture below.

Gage explains that the trending artiste, seemingly Intence, is telling producers to take his songs off the riddim they both are on.

While doing his live one person suggested that Gage was badmind, Gage responded stating that the person doesn’t know about badmind he west as far as to tell one person in the comments about their mother.

Gage went on to suggest that some artistes pay to get their music trending.