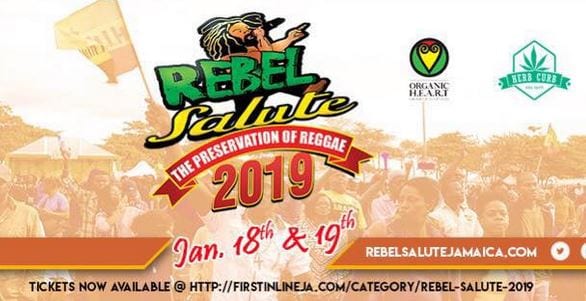 Here’s all you need to know about Rebel Salute 2019

In a recent interview Tony Rebel the main organizer of “Rebel Salute” the Reggae Festival that will be held in Jamaica, at Grizzly’s Plantation Cove on January 18 and 19, 2019. Details on the event and what patrons can expect can be found right here:
[Sharingbuttons]

There will be an Africa invasion or a reconnection of Jamaicans and Africans will be happening, as the African artistes that are doing well on the international scene such as Patoranking and Bobbywine will be there.

Patrons will have a chance to see many artistes who they have never seen before even though they have heard their music and other popular entertainers as well. Mr. Easy, Marcia Aitken, Mykal Rose, Rodney Price, the Wailing Soul, Wayne Marshall, Dawn Penn, Queen Ifrika, Jah Bouks, Agent Sasco, Ken Boothe, Mr. Vegas, Yellow man, Jesse Royal and many more popular Jamaican artistes are expected to perform at the event.

The Herb Curb will be a big part of the event. There will be a conference at a hotel in Ocho-Rios and persons will be trying to see how the whole Caribbean can benefit from the Marijuana. There will be a symposium outside of the “Rebel Salute” venue. There will be a lot of education about marijuana, the medicines and all of the many products that are being made from the herb. Patrons will be educated and entertained this year.

In this time when a lot of people are telling persons not to come to Jamaica, there are a lot of persons who are planning to come to the event as the hotels in the Ocho-Rios area are already seeing an increase in bookings.

The event has been known as one that promotes love and unity and it is Tony Rebel is determined to maintain the high standard that was set before.