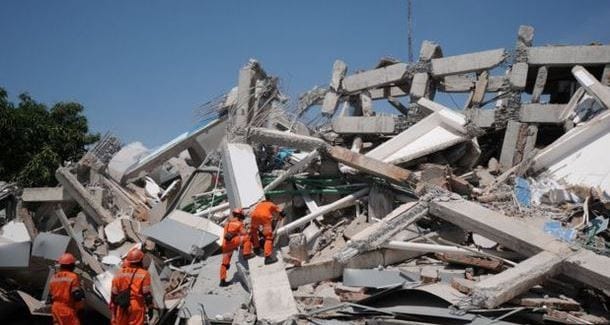 sharetweetWhatsapp
PinterestRedditStumbleuponTumblr
[Sharingbuttons]After being rocked by a 7.5-magnitude quake the coast area of Indonesia was then flooded by a Tsunami which caused the death toll to rise to all most 1,347 now. The Earthquake disaster took place last friday which triggered a Tsunami after.

At the moment the military and civilians are still searching for missing persons which includes a large group of students said to be stuck under rubble in a church, some of which were fond a day ago under large mud pile.

Despite finding bodies and survivors at regular intervals, there are still fears some survivors may still be trapped under the rubble of buildings. On the other hand People there are growing increasingly desperate for food, fuel and water as all public services are down.

Its reported that some 200,000 people have been affected and are in urgent need of assistance, a lot are considered to be children.

“We have to be very careful so we don’t risk hurting any survivors when we move the debris,” the head of the rescue team, Agus Haryono, told Reuters.