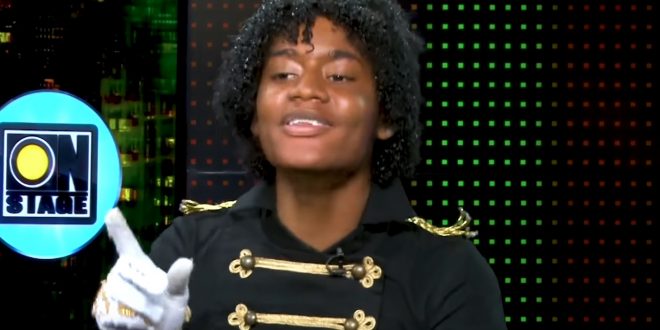 Since his rise to stardom new sensation “Ghetto Michael Jackson” has taken strides with his manager who goes by the name Wessy to establish a full-fledged career in music and performance and it does seem to be going well.

The young star recently made an appearance on the popular Jamaican entertainment platform “Onstage” where he and his manager Wessy spoke about the rise to fame the Dancer and now Recording artiste is experiencing. In response to a question, the host Winford Williams posted to Jackson about the beginning of his attention the youngster made it known that he was recognized to be talented from when he was a child in the community of Matthews lane as he was dancing since then.

In addition to what the young Jamaican said his manager Wessy told Winford Williams that there are many Impersonators of the late pop icon however he has seen none who is as serious as “Ghetto Jackson”.

He also mentioned that he knew him for some time and decided to help him because people were always laughing at whatever he did but he saw his talent. Wessy stated that he took up the young star in his hands even giving him a place to live as his grandmother had earlier kicked him out of the house and he had no mother or father.

Even though ” Ghetto Jackson” is not one to be talkative he did let Winford know that he was the biggest thing right now and “Gyal just a Faint, when dem ago stop”. In concluding the interview the young star had let Winford Williams know that he had not experienced any negative feelings regardless of not having parents. He went on to close the interview with his brand new hit song entitled “can I get a pic” which Wessy states is currently the biggest song in Jamaica.

The dancer turn recording artiste now has his merchandise available for his loyal fans or those who want to support his career.