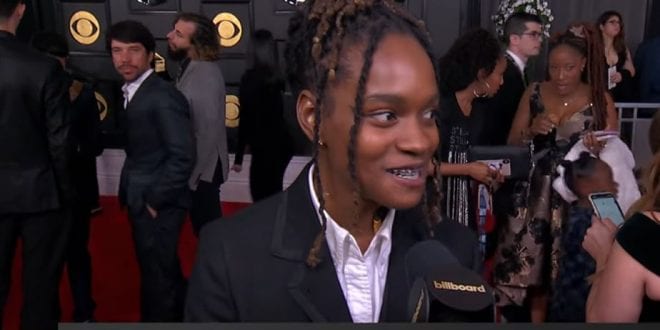 Koffee, the Jamaican artiste who is the newest sensation made history in January when she won the Grammy for the Best Reggae Album and became the first female artiste to win in the category.

The accomplishment was even a bigger deal because the then 19-year-old won the award with just a six-track EP and not the full-length album that was customary.

Her win also stirred up controversy about what constitutes a ‘full’ album and why the compilation was eligible for Grammy award.

The “Toast” singer recently revealed that she is working on her album now and even though no one can take away her Grammy win, or rewrite the part of history that went with it, Koffee could be looking to solidify her Grammy-winning ways with a new full-length album.

After she performed at the virtual Reggae Sumfest show recently she decided to do a little camp with some musicians and producers and a few artistes. They just built a vibes, seeing where that vibe would take them, with the hope that they can create magic. Koffee said the biggest thing for her right now is this album and she would be releasing singles in-between to keep the pace a little, but the album is really where her focus is right now.

Koffee did not give a timeline for the album’s release date or if it would be ready in time to be the nominated for next year’s awards ceremony.

She said it is her intention to continue making her mark on the international music scene. She believes that when she accomplishes greatness, it’s not just herself and her immediate circle that gets a chance to celebrate.

She feels very honoured as a young person from Jamaica to bring positivity and light to the world and wants to make people feel collectively and individually proud. She remembered walking on stage and collecting the Grammy award and saying ‘this one is for all of us. This one is for reggae. This one is for Jamaica”, and she meant what she said.

Once again Koffee created history last week, as “Lockdown” her latest track, raced to the million views mark on YouTube in 48 hours.

This feat made her become the first reggae artiste to get to that coveted mark on the platform in such a short time. The song is still trending in Jamaica two weeks after its release.

She is surprised by the song’s success and she is also excited to see how much more it will accomplish as time goes by.

“Lockdown” caused Koffee to be surprised but in a good way because it was just a little song that she decided to put out in the middle of a crisis and she is excited as she waits to see what will come from it.