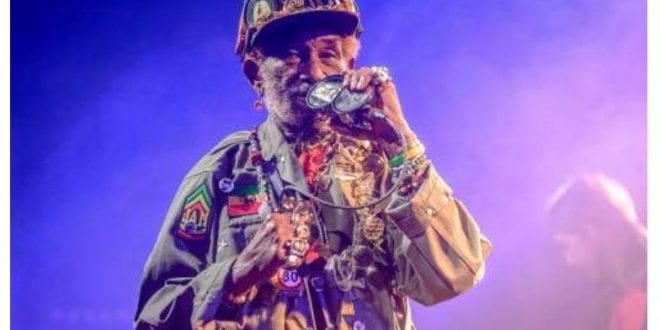 Lee “Scratch” Perry’s first entry on Billboard was in 1990, “From the Secret Laboratory” it got to number 8 on the World Albums Chart. Even though he did not dominate the top spots over the years he still managed to make the Reggae Albums Chart on a regular basis.

This the 16th entry for him to chart is “Heavy Rain” which is currently at the number one spot, this is Scratch’s first number one album of his 60 year career. 14 of his albums have entered the Top ten over the years.

Lee “Scratch” Perry who is now 83 years old stated in an interview with CHANNEL 4 that he gave Bob Marley reggae as a present back in 2015.

Most recently ‘Roots Reggae Dub: Special Edition’ got to number 3 in April, “Rainford ” was at number two in June and in November an EP, ‘Life of the Planets’ hit number 3.
] The other top Reggae albums this week includes..

‘World on Fire’ released by Stick Figure sold an additional 237 copies and had a total of 16,288, it was number one for 11 weeks before it dropped to number 2. ” ‘Hybrid by Collie Buddz fell to number 3 185 copies were sold.

Kranium’s album ‘Midnight Sparks’ is at number 4, it is a sophomore album, it was just released on December 6th, by Atlantic Records, the set of 12 songs sold 150 copies. There were collaborations with AJ Tracey, the British Recording artiste, Alkaline, and Mahalia.

Ty Dolla Sign and Burner Boy were featured on ‘Hotel’ which is one of the songs on ‘Midnight Sparks’, on the Billboard Reggae Digital Song Sales Chart it entered at number fourteen.

Over on the Reggae Digital Song Sales Chart Buju Banton’s “Trust” is at number 1.

The Expendables holds the number 5 spot with ‘Gone Raw’ which is their 13th song. The California Reggae Band released it on December 6 and it hit number one in 2017, while “The Moment Ways of the World” by The Movement fell, it is at number 6 and DJ Xyclone’s ‘Sounds of Africa’ sold 77 copies is at number 7.

‘Mass Manipulation’ the Grammy nominated album by Steel Pulse showed an increase in sales but still fell to number 8 Protoje’s In. Digg. Nation Collective was at number 14, It features songs by Lila Ike, Jaz Elise, Sevana, and Naomi Cowan. It is an all-female project on the Rock and Groove Riddim, with 8 songs.