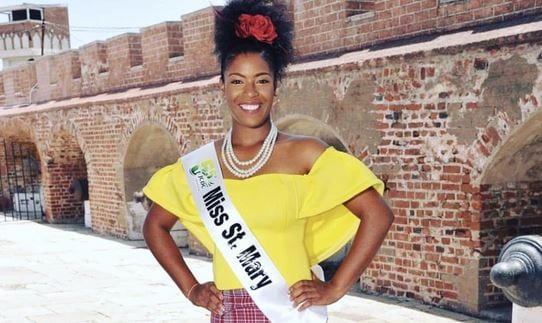 👁️ 1.3k VIEWS
sharetweetWhatsapp
PinterestDiggLinkedinRedditStumbleuponTumblr
Share
Ackera Gowe says she is a woman of faith and she gave up her job at the University of the West Indies where she worked with Director of Student Services, when she entered the competition. Her friends thought it was a bad idea, but she was determined to do her best and win the competition.

She worked hard and made sacrifice so she could win, as she wanted to make her people from St. Mary proud. She also want her parish to be more prominent and she wants to encourage young persons in her parish to work hard so they can achieve great things in life.

Gowie was a crowd favorite as her talent piece “Goat World”even won the Most Culturally Aware Prize. She wore a goat costume and brought awareness to the problem of predial larceny.
She had a little problem in the question and answer section but she held her composure and remained confident.