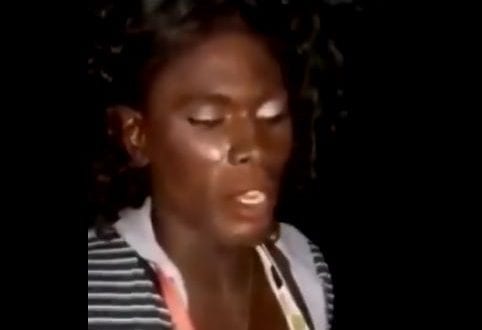 “Every now and again you see him burst out into tears.” Dawn Harris said. Her son Rafique “Nico’ Morris was videotaped when he was wearing a condom while he was handcuffed, while a cross-dressing prostitute demanding that he should pay for alleged services offered.

Her son has spent his night crying since the ordeal that happened in Kingston. Where he was allegedly set up by Rogue Cops. This, according to his mother, Dawn Harris, who is adamant that her son was ‘set-up’ by rogue cops.

It happened when he was stopped by policemen who he knew, he told her that he was told to allegedly give the officers $50,000.00 or go to jail for operating an illegal taxi. He decided he would not pay and told them to lock him up. He was then placed in the back of the police car.

It is alleged that they took him to a parking lot, and he saw two crossed-dressed Gays walking towards the car after the police made a phone call.

The mother then said her son started talking loudly and a Cop threatened to shoot him. He continued to resist when a condom was put on him, but there was a gun in his back, and he was told to stay still.

By this time, Harris said her son had started getting ‘loud’ and was threatened by one of the cops that if he did not calm down, he would be shot.

The police were accused of editing the video and telling the cross-dressers to make it seem as though Morris was asking for them for sex.

“After the video was done Morris was put in a police van and told that the video would be released if he didn’t pay the money they had asked for”. She said.

A probe has been launched by the Inspectorate and Professional Standards Oversight Bureau (IPROB) this was indicated by the Jamaica Constabulary Force (JCF).

Previous JA News: Constable From ST. James Charged With Raping A Minor… [Video]
Next Spice Planning To Have A Bigger and Better Birthday Bash Next Year