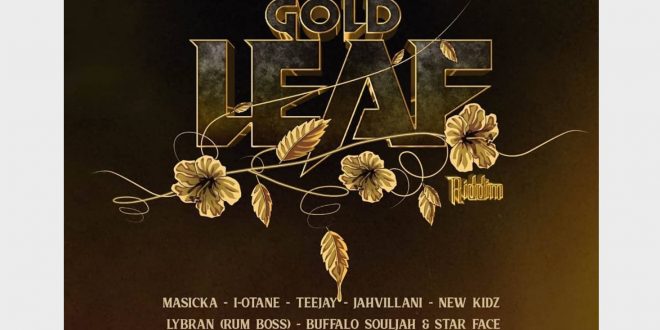 Dancehall recording label Natural bond entertainment has released a musical project for the ears of Jamaican listeners that promises to bring a lot of vibes with the big names it features.

The project coming out of the label is entitled “Gold leaf riddim” and was released in the past few days and is now available on all digital platforms.

Huge Dancehall names such as I-Octane, Masicka, Jahvillani, Teejay, Starface, New Kidz, and Deep Jahi all have songs on the project while other artists such as Knaxx, Dee Clef, Lybran, and Buffalo Souljah who are considered to be upcoming were still featured.

I-octane steps out on the track with a song highlighting the science of being “gyallis” with his track gyalology, while Jahvillani, Knaxx, and Deep Jahi also did songs for the ladies.

Masicka chose to speak about memories while Buffalo Souljah who recently released an album collaborated with Starface to do a song about family.

Already it is evident that Natural Bond Entertainment is putting in lots of work with the artistes as several videos have already been made while some are currently in the process of being done.

Two of the solid videos coming off the project are for the songs “Private Party” for Deep Jahi and “Get Gal easy” by Knaxx which both show the lavish dancehall lifestyle filled with money and girls.

This is not the first major music move for Natural Bond Entertainment either as the team has previously worked with many other dancehall artistes producing well-known hit songs.

One of their most recent projects was Beenie Man’s song “Do you wanna be that guy” that resonated with many people worldwide after the slang became popular on the versus clash between “The doctor and Bounty Killer”.

Natural Bond is now looking to widen their impact in the music scene with the “Gold Leaf Riddim”.

Listen to some of the songs featured on the riddim below.

“Get Gal easy” Music video by Knaxx Below.