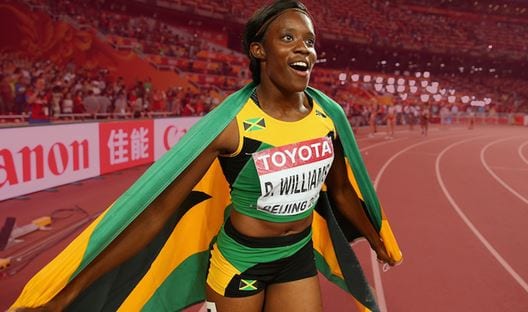 Danielle Williams celebrates her victory after she became the new record holder in the 100m hurdles in London UK on Saturday.

The 26-year-old was fast out of the blocks and kept her form throughout the race. The Americans were placed 2nd and third and another Jamaican finished at 4th place.

In 2015 she disqualified in the women’s 100 m hurdles in the world championships and was abandoned later at the Jamaican National Championships late last month. However, she is working towards winning the Diamond League title and qualify to become the wild cardholder who goes on to be at the World Championships in September.

If her dreams are realized Jamaica could have 4 athletes representing the island in the hurdling event at the next World Championship. If the JAAA’s accepts her invitation.

“I am thrilled with that, my aim was always to run fast,” Williams said in a post-race interview. she also stated that she was looking forward to the next stage of the Diamond League in Birmingham.

Winning the race in 12.52 sec. has caused her time to be a new world leading one, and the seventh-fastest time ever.

She erased her previous best timing and is now at a great place in her career.

She spoke about the fast track and her ability to correct her mistakes when she got a lot of practice in the heats.