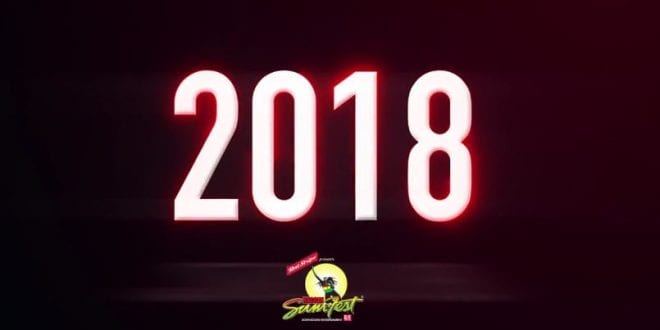 There will be three new events added to the roster, the venue will be expanded and there will be extra parking, an improved food court. A bigger crowd is expected to be there this year, as the ultra VIP experience was a hit last year. Bogdanovich and his team made the announcement and they are also considering the requirements of the fire department, but they realize that there was a big crowd at the event last year so they know it is best for them to prepare for a bigger crowd this year, so there will be no problems if and when the crowd is bigger still.

Reggae Sumfest week of activities starts on Sunday, July 15 with the usual Beach Party at Tropical Bliss Beach. The next event will be Sumfest Street Jam at the Old Hospital Park, followed by the event at Pier 1, the All-White party on July 17. On July 18 Sumfest Blitz will be at Hard Rock Cafe.

The traditional press conference is being replaced this year by Sumfest Inspire awards. This will be a by-invitation-only event and it is being held on July 19 at the Iberostar Resort, all this was outlined by Marcia McDonnough the Marketing consultant. She said the press conference had lost its sparkle over the years, so it is replaced by a red-carpet-style Awards. Awards will be given to persons who have contributed to Reggae Sumfest over the years, the press awards, like the Golden Pen awards and Photo Guru awards. Later that day there will be the Sumfest World Clash at Pier 1.
The other new event will be Reggae Sumfest Symposium which will be held at the Montego Bay Conference Centre, but all the details about that event have not been finalized as yet.

On night 2 patrons will enjoy Beres Hammond, Junior Gong and other great artists. Everything is being organized in a professional way so that patrons will be entertained in the best way, they will see the best of what Reggae music has to offer and create great memories.

Previous 94 persons detained in Grange Hill, Westmoreland
Next Tifa looks to up the Summer Vibes with “JA Party” single