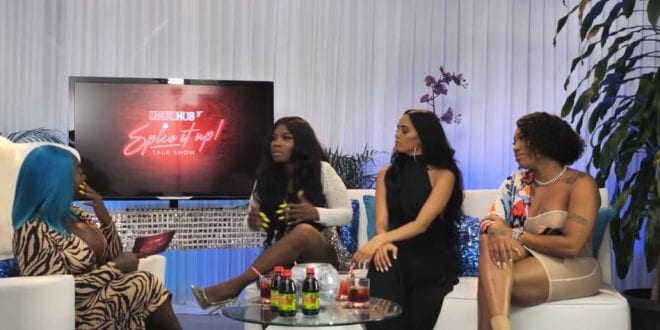 “Plastic Friends” on Spice’s, Spice it Up Talk Show

Dancehall Queen/ Entrepreneur Spice had Gabrielle Davis from Love & Hip Hop: Atlanta, Shauna Controlla, Pamputee, and the Deejay Triple X were her guests, on the night when her topic was “Plastic Friends”. They all got into a very heated conversation as they all shared the experiences they had with fake friends, pretenders or the people who smile with you and then try to destroy your life as you turn around.

“Can your partner be a fake friend”? Spice asked her guests. Even though she was ready to talk about her experience with fake friends over the years. Triple X quickly said, “woman a lucifer sometimes”, he didn’t want the women to say all the bad things about men, before he got a chance to defend men.

Shauna Controlla said, it is best for women to become their partners best friend, so he won’t hide anything from her. Even if he plans to sleep with another woman, he would tell her. In that way her heart would be protected, and she had a relationship like that in the past.

Spice said that wouldn’t work for her and Controlla was so strong. “The world needs to take a page out of Shauna’s book, but I still believed she is the fake friend in the relationship,” said Triple X.

Pamputee then started telling about her experience with a woman who needed help and when she even gave her, her children’s lunch money and had nothing left. The woman spread rumours about her. She even heard that she had stolen the woman’s microwave.

Paputee said, now she is playing it safe, keeping her circle of friends small.

Danielle then related her story, it was about a man who didn’t tell her about his woman and when people found out that he had a wife and she was also in his life, the persons who knew about the situation called her a home wrecker; and she was badly hurt by the accusation. The man who lied to her was still texting her after their relationship ended and the story was out, and she shared his messages that were on her phone with a friend, and the friend shared it on social media.

Triple X and Pamputee talked about the fact that women were taking other women’s men for a long time. Triple X told Daniel that she is 27, at that age, it is alright for you to take a man from a woman.

Spice then added her part, she said she has a dagger tattoo in her back, as she had so many betrayals, she is now wondering if having the tattoo is causing her to be targeted, she wonders if she need to have it removed.

They talked about the rivalry in dancehall and how it is unnecessary because everyone has their own style and fans. All artistes can make it when they work hard, and lazy persons sit around and watch the hard-working artist and envy them.

The show was quite entertaining, Spice did a good job as a host.