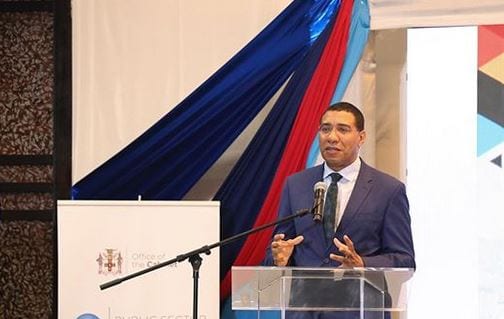 As Jamaica celebrates it’s 57th year of independence Prime Minister Andrew Holness says Jamaicans have a lot to be thankful for. He mentioned the state of the economy, the reduction of unemployment, low stable annual inflation, historically high foreign exchange reserves, a strong stock market, increased visitor arrival, positive credit rating among other positive developments that are now seen since his party won the election.

Holness also spoke about the growth in the construction industry, the strong stock market, the housing solutions that are being provided by the National Housing Trust (NHT) and the lowered interest rates.

However, he said he knew that speaking about the negative side of the situation in the country was important, as the corruption, the high crime rate and the need for more to be done about the protection of the environment, is not acceptable.

“Corruption deprives the poor and denies prospects for prosperity”, he said, and he also outlined what his government has been doing to change the way things are done in Ministries, as the reduction of corruption is being addressed and he also spoke about the removal of the two Ministers who are being investigated.

He pointed out that protecting the environment was very important for his administration and spoke about putting a stop to the Goat Island development and other decisions his Government as they listened to the views of the environmentalists.

New Campaign regulations, the passing of the Integrity Commission Act and the passing of legislation to give MOCA operational and administrative independence, were some of the new changes that were mentioned by the PM as he spoke about his plans to fix the problem.

Previous White Officers Walk Black Man Down The Street Like A Dog
Next JA News: Constable From ST. James Charged With Raping A Minor… [Video]