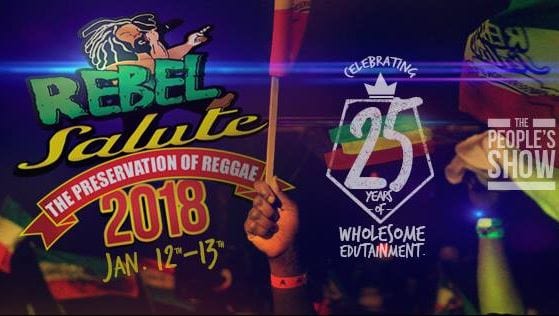 Rebel Salute’s 25th anniversary to be special… See Lineup Inside

sharetweetWhatsapp
PinterestRedditStumbleuponTumblr
[Sharingbuttons]The launch of Rebel Salute the famous family oriented, cultural festival that has maintained it’s high standard over the 24 years since it has been going on; was held on Monday night at the Jamaica Pegasus in Kingston.

The organizers are eager to keep up the good image of the festival by presenting the ultimate best, they are thinking of continuing the Herb Curb and Reggae Camping at the next staging, as it was well received when it was introduced at the last event. They are determined to make the 25th anniversary celebration very special.

So get ready for the 25th staging, it will take place from January 12 to 13 2018, at Grizzly’s Plantation Cove in Priory St Ann. You can’t afford to miss it.