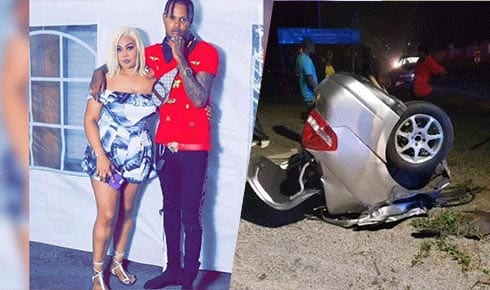 According to reports FRESH KING and his girlfriend Junique Chung were returning from an event on Sunday when the car in which they were traveling in got out of control hits a wall and splits in two. It’s reported that the female died on the spot while the fast-rising dancehall artiste is currently in critical condition.

The fatal car crash took place early Sunday morning along the New Green main road in Manchester, the young couple has a one-year-old child. First, it was Aidonia, then it was Blak Ryno’s fake accident now promising artiste Fresh King, in fact, got in a deadly accident, it would appear the rumours about Ryno’s accident played out for Fresh King.

Picture of the Nissan Car they were driving in after it split in two.

Video of the artiste after the accident.