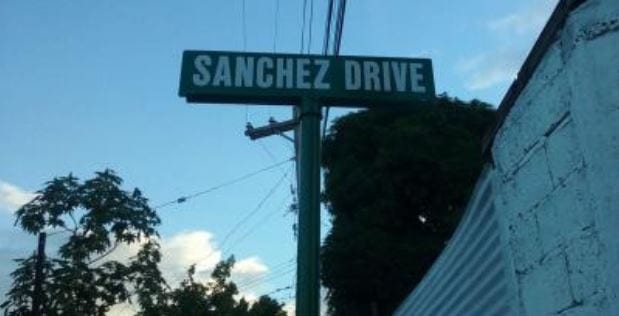 Sanchez gets road named after him

sharetweetWhatsapp
PinterestRedditStumbleuponTumblr
[Sharingbuttons]Veteran Reggae roots singer Sanchez his elated after getting a road named in his honour, Kevi aka ‘Sanchez’ says it was a moment of great joy and humility. Sanchez explained that “This is such a wonderful feeling. I am honoured, I am blessed and I am humbled,”.

Last Sunday several other veteran Jamaican entertainers were also honoured by having roads named after them, it was a celebration as community members and several members of Parliament joined the occasion such as Lizard Road, Flourgon Way, Red Dragon Path, Fabby Dolly Way and Sultan Way.

The newly labled “Sanchez Drive” is located in the community of Park Lane, off Red Hills Road