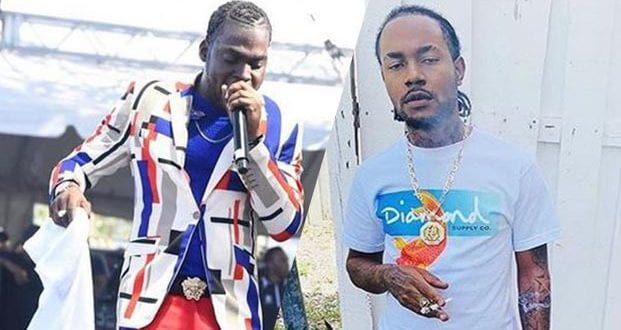 Mobay dancehaller Shane E is at odds with yet another young artiste after first falling out with Tommy Lee then Rygin King, now Jahvillani is feeling Shane E’s wrath. “Mi nuh wah nuh bwoy a come run inna mi DM a come tell mi seh mi nuffi big up 6ix..” Shane E opens up to persons inboxing him about taking side with Jahvillani and not the 6ix team.

Shane E who got angrier as the seconds pass by went on to state that “Mi nuh rate bumboclxxt wile side guh suck dem madda.. mi nuh rate Jahvi dem suck-out dem madda” The Flankers artiste also explains that persons from Wile Side team have been telling selectors to not play his songs at parties.

“mi wi wicked to dem bredda” Shane E concluded by stating that he really wants to focus on his music and not beef with fellow dancehall artistes.

Shane E performed a couple days ago at Reggae sumfest in Montego Bay, The rebel side deejay seemingly is still upset after his 6ix friends did not get to perform at sumfest.

Shane E confirms that he will never be friend with Tommy Lee even though he might re-unite with others.

One person commented “Badness and music don’t work we have seen it over and over again vybes kartel ninja man and the list goes on ” while another said “Thing a get serious now why unnu involved the man. bout him music cah play over wsg smh. Bredda man noh want no war in a the thing but a dah side e dey go”.

Shane E is known for songs such as “Gone Sleep” and “Blessings”.