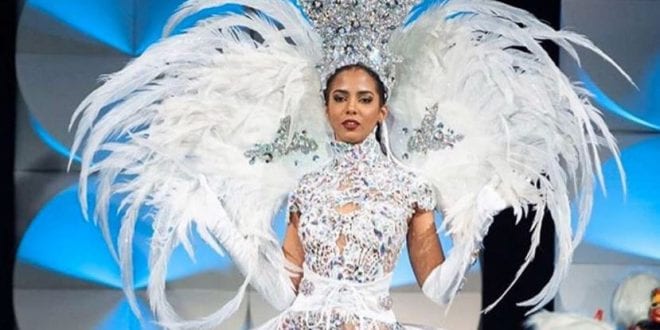 Jamaica’s contestant in the Miss Universe Pageant ‘Iana Tickle Garcia’ caused social media users to be divided over the theme chosen for the costume design.

‘White Witch of Rose Hall’, The costume, dubbed ‘Annie Palmer pays homage to the 18th owner of the Rose Hall plantation’, the controversial outfit was revealed during the pageant’s preliminary national costume competition round.

The Jamaican National Costume at the 2019 staging of Miss Universe pageant has not gained the approval of those who would like the contestant to portray a positive image of the country.

Miss Jamaica Universe posted the following online “Annie Palmer, THE LEGEND OF ROSE HALL…. Dubbed the White Witch of Rose Hall, local folk legend has it that Annie Palmer ruled the 18th century plantation with an iron fist and drove fear in the hearts of loved ones and enemy’s alike,”

Many believed that Annie Palmer is still a part of the country’s history, regardless of her actions, her story is known across the world and the legend of Annie Palmer has a significant impact on Jamaica.
However, another person said “How did this girl team make such a bad mistake? ANNIE PALMER? Are you kidding me?

“Annie Palmer was wicked and did so many bad things to the slaves, is the same thing we doing to each other as Black people”. “The exception that she is white, that makes it even worse” said another.

It was said that the costume glorified a negative part of Jamaica’s history and believed they would prefer if a more positive part of our history was represented.

Jamaicans praise light-skinned people and don’t care what happens when you are dark, that is why the organizers can get away with this, another one said.

In the end, they are all still happy that a Black woman from South Africa, won the contest