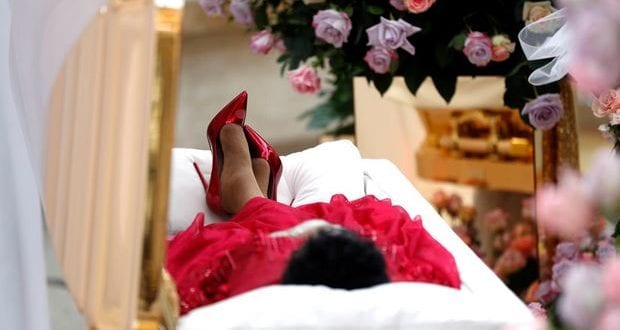 sharetweetWhatsapp
PinterestDiggLinkedinRedditStumbleuponTumblr
Share
Aretha Franklin’s funeral in Detroit was attended by musicians, family, fans and friends. The funeral service lasted for over seven hours it was both celebratory and mournful. The crowd even broke into a spontaneous dance of praise at a point.

Chaka Khan and Ariana Grande who sang “You make me feel like a natural woman” did well, even though Aretha’s Gospel roots were the focus and Stevie Wonder delivered an emotional finale that was truly memorable. Stevie said he was there because of love, and led the congregation as he sang his song that has this refrain ” I’ll be, loving you always”.

The Queen of Soul died of pancreatic cancer earlier this month; she was 76 years old. Her final send off was truly fit for a queen, it involved 100 pink Cadillacs, a gold-plated coffin, with champagne velvet lining the inside, it also had a name and title stitched in Golden metallic thread, three presidential tributes and more than a dozen preachers did eulogies for her.
She was remembered as the Queen of Soul, Black civil rights activist, icon of Black womanhood, grandmother, aunt and mother.

Smokey Robinson spoke about seeing his longest friend going home, he grew up with her in Detroit. He sang a capella of his song “Really Gonna Miss You” and said Aretha will be on heavens choir.
Mourners were drawn to their feet and some raised their arms and praised when Jennifer Hudson sang Amazing Grace and Gladys Knight did “You’ll Never Walk Alone”.

Aretha’s son Edward sang Marvin Gaye’s Mercy, Mercy Me and she was remembered as an Aunt who taught bad shopping habits who chartered a bus to go to President Obama’s inauguration by her niece. Mr. Obama was unable to attend the funeral, but he sent a great tribute to be read at the funeral and so did George Bush, but Bill Clinton spoke about his love for Aretha, at the podium.

Rev. Al Sharpton spoke about Aretha’s contribution to the civil rights movement and also said “Aretha never took instructions from anyone else but God” Detroit’s Mayor, Mike Duggan was the person who announced the tribute concert and the renaming of “Chene Park”, it was renamed “Aretha Franklin Park”

Previous Usain Bolt Debut as a pro footballer… Watch Highlights [Video]
Next FAIL: Giant panda unsuccessful on first try to get it in, naturally reproduce [Video]