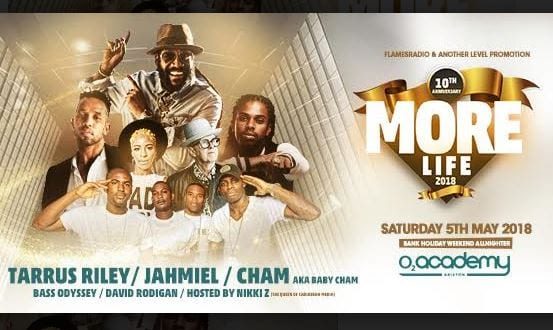 Now, with six albums to his credit and an ever-growing catalogue of great tunes, including ‘Contagious’, ‘Never Leave I’, ‘Superman’, ‘Gimme Likkle One Drop’, Riley continues to soar. His most recent LP, ‘Love Situation’ debuted at #1 on Billboard’s Reggae Album chart.

Tarrus Riley recently paired up with R&B songstress Estelle for a honey-glazed duet ‘Love Like Ours’, which featured exclusively on VP Records’ landmark Reggae Gold 2017 compilation.

Grammy-nominated dancehall artist Cham, formerly known as Baby Cham, is one of the most consistent performers in the genre’s history.

A 2006 Washington Post review of the deejay’s concerts described him as “a dancehall artist who crosses over the U.S hip-hop market.”

Some of his more popular tracks include ‘Wine’, ‘Lawless’ and ‘Ghetto Story’.

Conscious, uplifting and versatile are three words that many associate with Jahmiel, a popular fixture on the Jamaican music scene. The 25-year-old’s career was initially nurtured by Shocking Vibes production, the stable responsible for Beenie Man’s early success.

His first breakthrough song came with 2014 recording ‘Long Distance Love’, which peaked at #1 in Japan. Over the next few years, internationally acclaimed anthems ‘Gain the World’, ‘True Colours’ and ‘Strongest Soldier’, have earned him a deserved place in the heart of dancehall patrons.
Nikki Z is worthy of the title ‘The Queen of Caribbean Media’. Born to Jamaican parents, the American-born beauty’s credentials are vast; from working in field production at BET and The Wendy Williams show to audience coordination for Comedy Central and correspondence for BBC 1Xtra.

The 21st Halipos VP has also anchored radio shows on some of the Caribbean’s leading platforms. She’s hosted internationally acclaimed live music events including Reggae Sumfest, The Welcome to Jamrock Cruise, Sting and, most recently, Shaggy and Friends, to name a few.

Founded in 1989, Bass Odyssey is a sound which has stood the test of time and needs no introduction. This iconic collective are the four-time winners of the UK Cup Clash Sound Clash.

David ‘RamJam’ Rodigan has entertained legions of radio listeners for almost four decades on stations such as Capital FM, BBC Radio and Kiss FM. He regularly tours the world, embarking on clashes and dazzling spectators with his showmanship, as one of the most important figures in reggae music.

The event is produced by leading UK radio platform FlamesRadio, one of the only stations in the country to successfully stage live events throughout year.

A key component of the station’s brand is the ‘Our Culture Matters’ campaign, through which it showcases Caribbean culture to thousands of consumers, both accustomed and new, each year.

The More Life promotional team are excited about what lies ahead and said: “We spoke to our customers and received great feedback from More Life 2016. For an indie promoter/media company, we are fast-becoming a competitor in the urban market, while keeping to the authenticity of the brand.

“Our figures speak volumes. More Life is a brand that people know and recognise; it represents the Caribbean from start to end.”

Tickets are on sale now; limited early bird ones have already sold out. With the buzz already circulating around More Life 2018, the musical extravaganza is, once again, expected to be a road-block event.