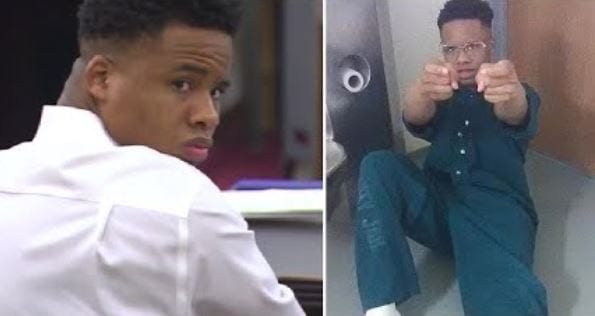 Hip Hop Rapper Tay-K is now indicted for another murder and might be facing a death penalty. This is causing people to wonder if it has become normal for Rappers to be involved in crime.

Tay-K whose given name is Taymor McIntyre, was found guilty on July 19 and sentenced to 55 years in prison after he was involved with a home invasion and robbery that took place in 2016. He was only, 16-years-old at the time, but he was tried as an adult. The victim, Ethan Walker who was, 21-years-old and the man who killed the victim got a life sentence last year.
[Sharingbuttons]

The Rapper who was only, 16-years-old when he allegedly killed 21-year-old Anthony Saldivar during a robbery in 2017, he was charged with intentionally shooting and killing, according to the Bexar County District Office.

Tay-K’s sister defends her brother publicly as she compares her brother’s case with Amber Guyger’s case, where a white girl got 10 years for murdering a Black man in his own home. She wrote posts on social media about her brother’s innocence as she believes he shouldn’t be charged for simply not anticipating that a murderer would kill.

It is important for persons to empathize with the family of the deceased, but the prosecutors looked at how Tay-K rapped about the murder shamelessly in between spending time in jail.

He managed to evade law enforcement officers by going to San Antonio and released a big hit song in 2017, and called it “The Race”, “F**k a beat, I was tryina beat a case, but I ain’t that case b***h I did the race”, he rapped.

He is now detained at the Bexar County Adult Detention Center in San Antonio, Texas awaiting trial as a 19-year-old.

Rapper Kodak Black was slapped with additional felony charges recently when he is already serving time. Rappers not sticking to the music business seems to be the trend for a while now.

Watch the music video below