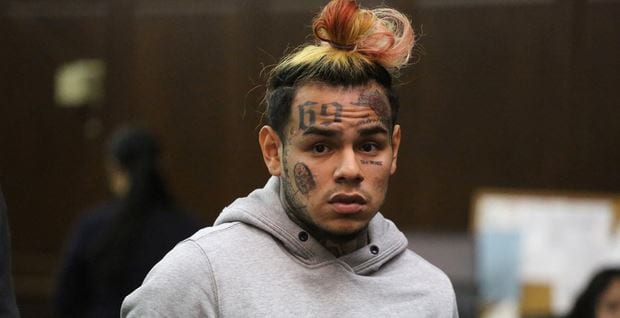 Tekashi who faced 47 years in jail because of charges that were laid against him, has spent most of his time last year behind bars and now there are rumours out there that he could be released in a matter of hours.
[Sharingbuttons]

His fans were shocked when his New York attorney Moe Gangat suggested that Tekashi could be released on Wednesday, December 18, 2019.

Gangat posted a video with the message on Instagram in which he said fans might see Tekashi with a sentence of time served. Even though the rapper has only spent under a year in federal prison.

“The Government tells the judge what sentence the prisoner should get. Here the Government hasn’t asked for any sentence, what they’re saying is time served, no sentence”. the lawyer said.

He also posted another video in which he said he believes it is unlikely that Tekashi will spend more time in prison even though he could potentially be facing a 37year prison sentence.

Gangat also said the Government is there to prosecute crimes and the defence attorney is there to defend the accused. The judge should act as an arbitrator, to figure out whose argument is best, and make a decision.

6ix9ine’s sentencing date is set for Wednesday and he will be released if there is no further sentencing.

Earlier Tekashi 6ix9ine Pleaded Guilty to 9 Federal charges in State Supreme Court in Manhattan. 22-year-old Daniel Hernandez aka Tekashi 6ix9ine admitted in court to being a part of the Nine Trey Gangsta Bloods from out of New York.

The flashy rapper said a lot to the judge including “i paid a person to shoot at a rival”, he then went on to state that it was to scare them. “I did this to maintain or increase my own standing in Nine Trey”, also “shooting at people, robbing people and, at times, drug trafficking,” Tekashi told all that he could when he last took the stand in an effort to get as less time as possible in prison.