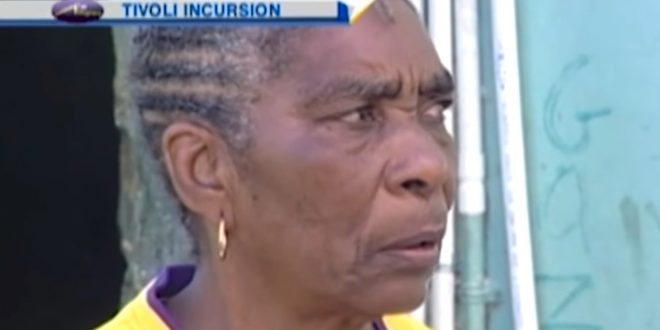 It has been ten years since there was an attempt to arrest Christopher ‘Dudus’ Coke for extradition and the security forces conducted an incursion in the Tivoli Gardens community. There was extreme trauma because of the killing, probable murder and disappearance of a lot of men from the community because of what the security forces did.

Miss Joan McCarthy said the soldiers knocked on her neighbours door at about 1 pm and she didn’t wait for them to get to her door, she didn’t resist as she put her hands over her head and came out with her 2 boys behind her. They did as they were told to do and came out of her house because the security forces called her out before they were sent downstairs, other members of the security forces and many of her neighbours were down there when she got there.

Both men and women were gathered downstairs and an army of police and soldiers were there as well. The police then started questioning the men.

Andre and Dwayne, her two boys were taken back upstairs by the members of the security forces, she then heard shots firing and everyone was scared, not long after they came back down with a body and she knew it was Dwayne’s body because she saw his pants and shoes even though he was wrapped in a sheet that was previously on her bed and she believes she saw Andre’s body after that, she believes he suffered the same fate as Dwayne.

Miss McCarthy was sent into a neighbours room by the lawmen when she saw the other body, she said “that was Andre’s body” as two of the lawmen were carrying it away.

She said she asked the police to kill her too because she didn’t know how she would live without her boys, even though she didn’t give birth to them she loved them and depended on them.

She believes he was beaten before he was killed because she picked up a tooth off her bed.

When she went to the Tivoli Gardens Community Center afterwards to get more information about the dead, she was told to view bodies on the internet, she is not sure her boys were among the bodies she saw because the photos were not clear.

She was told that the bodies were already decomposed and she would not be able to see them.

She continues to wait for answers, but all she now has left is a few photos, walls scarred by bullet holes and a Bible.