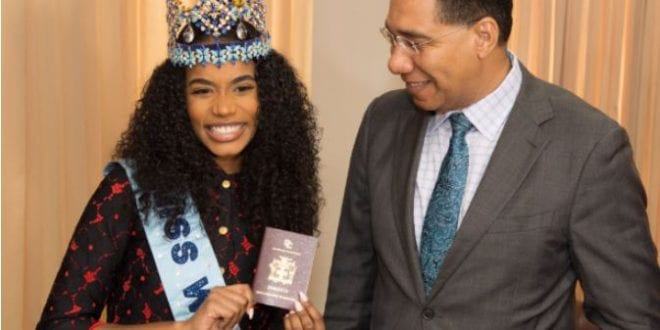 sharetweetWhatsapp
PinterestDiggLinkedinRedditStumbleuponTumblr
Share
Andrew Holness, Jamaica’s Prime Minister announced that Miss World 2019, Toni-Ann Singh, has now been given a Diplomatic Passport so she can now travel the world with the country’s blessings.

The beauty queen was named ambassador-at-large for Jamaica. The announcement was made when she made a courtesy call to his office.

The Prime Minister said Toni-Ann will make a great Ambassador for both Jamaica and the Miss World Organisation.

The Jamaican who won the Miss World competition from a field of more than 110 competitors from many different countries, is 23-year-old and hails from Bath in St Thomas.

The Prime Minister also said she should be supported by Jamaicans as she represents the country’s brand and does her duty to the world.

The Government of Jamaica welcomed the nation branding opportunity to boost Jamaica’s status as well.