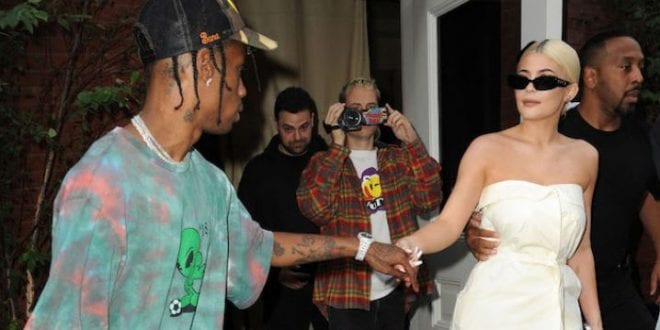 sharetweetWhatsapp
PinterestDiggLinkedinRedditStumbleuponTumblr
Share
Fans believe the Grammy nominee’s new song “Gatti” seems to have some lyrics that could be making a reference to his split with the ‘Keeping Up with the Kardashians ‘ star and beauty mogul.

He could be making music about what happened between them. Stormi Webster’s parents, Kylie and Travis are spending time apart after they were together for two years.

“Duck away, she wanna lay-up and hibernate, I took a chance, it’s a lot to take”, Travis raps on the song.

Kylie runs her business in Southern California and spends a lot of time with her daughter Stormi at her home, while Travis is touring, he performs all over the world. The couple now has a cordial relationship now and fans are saying both parents have different lifestyles.

Kylie also posted Travis’ music project on her Instagram story on Thursday night as she decided to promote it. She also wrote Stormi’s Dad under the screenshot of the new album.

Sources revealed that Kylie also invited Travis to celebrate the holiday and she was excited that Travis made the effort to be there because he is still a part of the family. They all took turns at holding Stormi and danced together.

Kylie who is 22-year-old and 27-year-old Travis also reunited for Thanksgiving and Christmas holidays as well. They were both with Stormi at Kourtney Kardashian’s annual Kardashian-Jenner Christmas Eve Party.

Previous Mr. Vegas talks about the Importance of New Years Eve to Slaves not Jesus [Video]
Next What Can Run But Not Walk?… Trick Questions In Down Town, Kingston [Video]