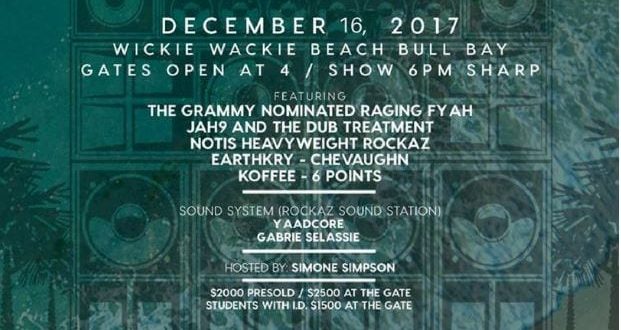 sharetweetWhatsapp
PinterestRedditStumbleuponTumblr
[Sharingbuttons] “Mother nature is unpredictable, and one can’t argue with her. So for the safety of our patrons, artists and staff we rescheduled Wickie Wackie to this upcoming Saturday the 16th” stated stage director and Palmer House Ent’s CEO Caniggia Palmer. “We didn’t want to wait too long, many reggae fans have come from outside Jamaica for some roots, rock and reggae vibes, and that is exactly what we aim to offer. We are thankful for their support, and what better way to show our gratitude but to have the show go on!”.

On Saturday, December 9th, the annual Wickie Wackie reggae music festival was to take place against the breathtaking backdrop of Wickie Wackie Beach. As all preparations were underway, the temperamental weather came down upon the music festival causing electrical risks for all parties involved. The organizers, Grammy nominated Raging Fyah and Elite Organics Production concerned with safety, made the decision to cancel the event for a later date.