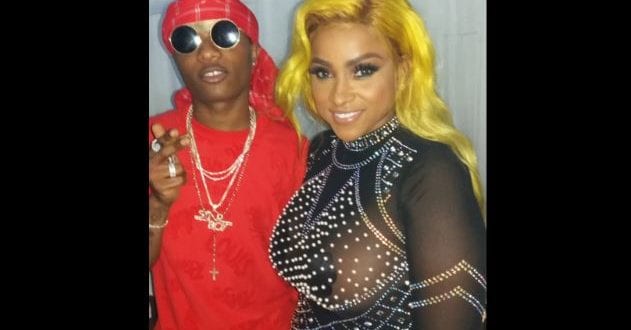 The rumor mill has been churning recently with allegations of a relationship between popular Jamaican host and recording artiste Yanique Curvy Diva and International afrobeat superstar Wizkid.
Advertisement

Wizkid is a Nigerian based afrobeat artiste that rose to international acclaim with “Come Closer’ featuring Canadian Rapper Drake in 2017. Since then Wizkid has released numerous chart topping hits with artistes like Future, Chris Brown and Cardi B.

The rumors started late last year when Curvy Diva visited Nigeria and performed in Lagos on Wizkid’s Concert, ‘Wiz on The Beach’ in December. The two were spotted hanging out at various locations throughout the Diva’s 2 week visit including a video shoot for Mr Eazi and Skales where Curvy Diva did a cameo appearance.

Most recently there has again been speculations of a relationship between the two after the StarBoy posted a video of The Curvy Diva dancing to his new hit single ‘Soco’ on his 5 million strong Instagram page and captioned the video ‘Jamaica showing Soco some love, Queen @YaniqueCurvyDiva Ya bad gyal fi dis” followed by a heart emoji.

The Curvy Diva then reposted the video on her page paying homage to the King of Afrobeat, Wizlid, as she prepares to return to Africa for a 13 city tour.

A video of the two enjoying each other’s company has also been making its rounds on social media sites over the past few days and fans say the video make the Nigerian Billionaire artiste and the Jamaican star seem more that just friends.

“Wizkid and I are friends, he’s a talented artiste and we have been following each other on Instagram for over a year, and as a person he’s fun and we enjoy each others company, but we are not in a relationship., I’m still single guys and when ever that changes I will be the first to tell all my fans” Yanique added.

In the meantime, Yanique is focused on her music and is working with a few producers on new projects that will be released in a matter of weeks. She is set to shoot the music video with I-Octane for their single ‘Unfair Games’ produced by Good Good Production later this week.

The Curvy Diva is also planning her first ever Birthday Party ‘Lifestyle’ the Pool Party edition to be help on Sunday April 29 at the Constant Spring Golf Club. She is set to return to Africa and Canada on separate tours this Summer.
SOURCE: StreetCred Jamaica |