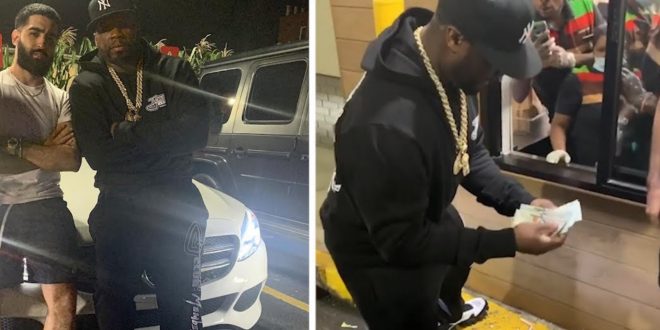 Rapper and business mogul 50 Cent linked up with entrepreneur Jay Manzini to give out thousands of cash to Queens’ South Jamaica neighborhood Burger King Workers.

50 Cent and Jay pulled up at the BK drive-through which is located in the same neighbourhood 50 Cent grew up in.

Jay Manzini interacted with the workers first, talked to them and gave them all the cash he had in his pockets. “one more thing” he stated and there was 50 Cent who walked up with more money to give out.

50 posted the good deed online with the caption below.

One person mentioned that it was her birthday while another was repeatedly asking 50 Cent for an acting role in Power “Can I go in power” the young man asks.

The cops arrived within minutes on the scene to check out what’s going on and 50 Cent also offered them some cash Watch the video below.

RELATED: 50 Cent explains why he doesn’t love his son [Video]