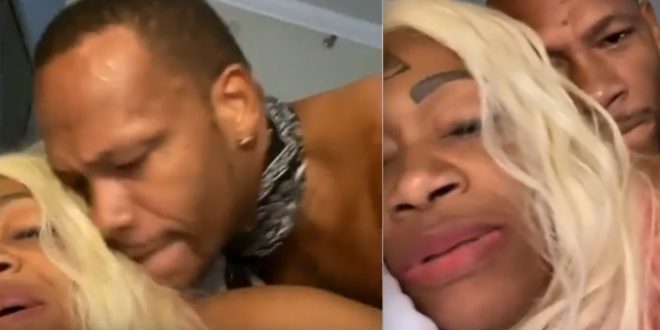 Amari aka Dj Monalisa after grabbing Jamaicans attention with “Necko” is following up with more eye-opening content has she looks to keep the spotlight on herself.

The latest from Amari is a sextape with herself and her estrange partner “collin”.

In the short video clip, we hear Amari singing “CJ yuh mashup mi life” while her boyfriend “Collin” appears to be stroking her from behind and kissing her on her back.

According to selector Richie Feelings “Amari a real star enuh… hey a some big movie star dem yah enuh” he jokingly states while claiming that people don’t have sex sideways and the clip was just a movie. Richie went on to state that “Collin a stab and she nah mek nuh noise” which made it clear to him it was not a blues, it was a “white” he states.

Weeks ago Amari and Collin was involved in a fight while on IG live where they threatened to hurt each other physically “me ago stab up yo bloodcleet” stated Amari in the video which also went viral.

RELATED: Sex Tape Said to be of Kevin Gates Leaked and Twitter Is Going Crazy!

RELATED: Toni Braxton wishes she had more Sex and fun while she was younger

RELATED: Woman Twerks on her Sister’s Future Husband as Part of Sexual Tradition before Wedding [Video]