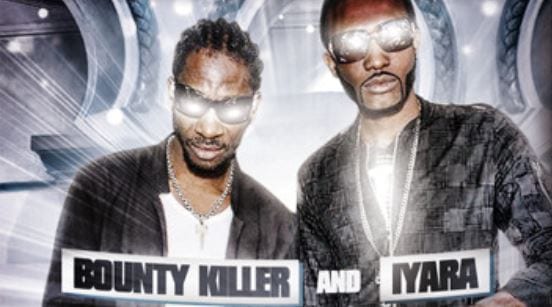 In a release published by the Jamaica Star Bounty Killer’s protege, Iyara gave his take on being apart of the alliance and parting ways with his “father” Bounty Killer. The tall deejay explains that the main reason for him parting ways with the killer was due to the lack of attention he got while in the group.

Iyara earlier explained that “Over the years, we deh roun Killer, and we a put in the work, and me feel like a di time now fi elevate and focus pon me self. Me have people weh a depend pon me too, so me haffi get myself out there so mi can support who a look up to me. Cyaan live inna your father’s house forever.”

Iyara states that he won’t be around Bounty anymore, himself and Killer are currently on two different paths, Iayara explains that he won’t make any effort to link Killer but if they need to talk Bounty can call him and if he sees killer in the street he will hail him “People always expect fi see me roun’ Killer, but dem nah go see that again”.
[Sharingbuttons]

On the heels of this publication, Bounty Killer had a lot to say in response to Iyara’s claims.

Bounty killer wrote the following on his IG “Alliance wishes Iyara all the best in his career and endeavors but attention was not and could never be the issue yute maybe more like over exposure was by u being in the public’s eye way b4 fully developing proper skills I know lyrics was always there but variation of vocal abilities melody schemes and flows is just coming full circle”.

Exposer / Attention
Bounty tackled the matter of exposure stating that “Iyara remember Sumfest 2017 I got u and Kqueens booked to do unuh own ting perform solo and u took a show in Canada for 2000 instead what exposure is bigger than a Sumfest stage in dancehall just always get ur priority str8 bredda”.

Alliance
with regards to Iyara leaving alliance KILLER noted that “no man cannot declared that he left Alliance and still considered to be apart hell no Busy never said he left and he is doing his own thing from then Bling didn’t Marshall didn’t they just branched off to do their own but never announce no affiliation and since own way ting u stopped coming to Bounty Sunday’s so how do u still supports Alliance bcuz if most man get 1% of the attention u gotten u would realize how much u should be thankful also I’m a bit disappointed with ur article bcuz up to now u didn’t say u was grateful for whatever little attention or exposure u gotten from Alliance though u only said u wanted more attention and that says a lot about a person generosity but handle ur business Iyara👊🏿👊🏿”.

Iyara in recent times was known to be the artiste that Bounty supports the most from his Alliance young generation camp, they both did countless interviews, songs and shows together.

On the other hand a couple of months ago Bounty Killer spoke about being apart of former Alliance member Vybz Kartel’s documentary.

WATCH: Milk Opens Up To Being Bounty Killer’s Side Chick For 7 Years [Video]