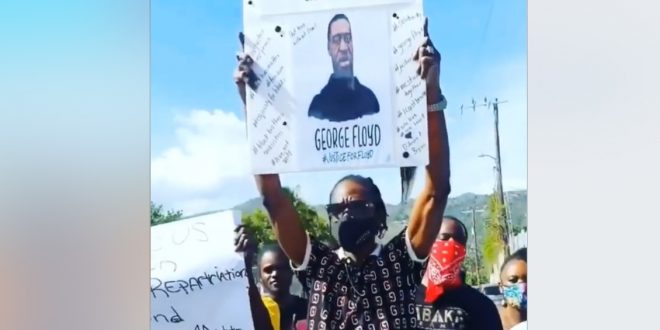 Bounty Killer Joins BlackLivesMatter Protest in front of the US Embassy

Veteran dancehaller Bounty killer is the latest Jamaican musician to take part in a march/protest against the ill-treatment of black people around the world which was triggered by the death of Black American man George Floyd who was killed casually by a police officer.

Spice, Nature Ellis, Morgan Heritage, Kabaka Pyramid etc are the notable others who have taken to the streets in Jamaican and the USA to speak out against racism.

Unable to take to the streets, Vybz Kartel, PM Holness and several Jamaican celebrities have taken to social media to fight against injustice in our society.

Bounty Killer can be seen holding a poster that states “we stand in solidarity with our black brothers and sisters in the united states”.