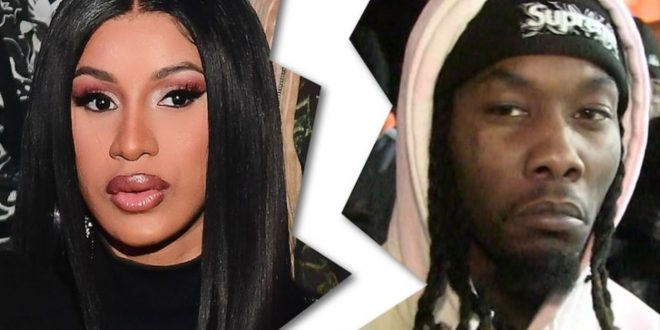 Cardi B files for Divorce from Offset

Power couple Cardi and Offset are calling it quits weeks before their 3 year wedding anniversary. As reported the two are currently separated and the divorce documents were filed on Tuesday, September 15th.

According to TMZ, Court Documents filled in the state of Georgia by Cardi B outlines that she wants dissolution of her marriage to rapper Kiari Kendrell Cephus more commonly known as Offset.

The relationship has “no prospects for a reconciliation” and Card B is seeking “an equitable division of all marital assets.” she also allegedly stated that the Marriage is broken.

Cardi B whose real name is Belcalis Marlenis Almánzar is seeking full custody of their two-year-old daughter Kulture and wants Offset to pay for her legal fees.

In the documents Cardi B is also asking for child support.

Both got married in 2017 and made the announcement to the public a year later.

The New York rapper and Offset got into a rough patch after their marriage when Offset was caught up in a cheating scandal. Both outspoken musicians did repair their marriage after that break-down.

RELATED: Cardi B and Offset Gets Intimate to Chuck Fenda and Cherine’s “Coming Over” Reggae Song [Video]

Back then Offset pulled out all the stops to get his girl back, which he did, now reports state that he don’t want to move forward with a divorce and he is doing all he can again to stop it.

Cardi B is currently experiencing huge success after the release of her WAP collab with Megan Thee Stallion which as racked up almost 200 million views on youtube in under 2 months.

With no content released to the public about recent drama in the marriage fans are now speculating what offset might have done to cause the split.

RELATED: “Look At Me Now” Cardi B Sings Nesbeth’s MY DREAM Song [Video]