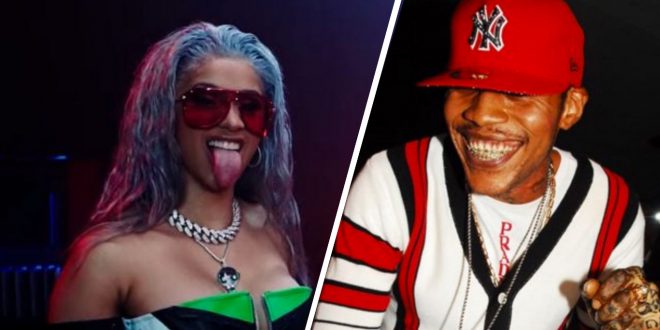 Vybz Kartel posted a video clip of one of his fans singing to his remix to Cardi B’s WAP and Cardi seemingly entertained by what she saw decided to repost it to her page. Over the hears Cardi and Rihanna have publicly shown their love for Vybz Kartel’s music by singing to his songs and dancing to them.

Jus hours ago Cardi B wrote “Haaaannn this my one of my FAVORITE ARTIST IN THE WORLD @vybzkartel .He remix WAP all the way from Jamaica 🇯🇲.”

Vybz Kartel replied to Cardi B’s post with lots of flame emojis while many other dancehall fans showed respect in the comments area. Vybz kartel did not only showed his appreciation there, he went to his IG and repost a snippet of what Cardi posted with the caption “Nuff love & Respect Mami!!!!❤ @iamcardib this a #CardiBdubplate! So its not local …its global!!!”.

Vybz Kartel referred to “dubplate” as he continues to take shots at all the dancehall artistes who supported several politicians in the upcoming general election set for September 3rd.

Cardi B also did acknowledge Ishawna’s refix to WAP, in a comment about Ishawna’s song she stated that Jamaicans are too nasty after hearing Ishawna singing about having Cardi B go down on her.

RELATED: Cardi B Joins Only Fans, says No Ass, Pu$$y nor Tit Pics