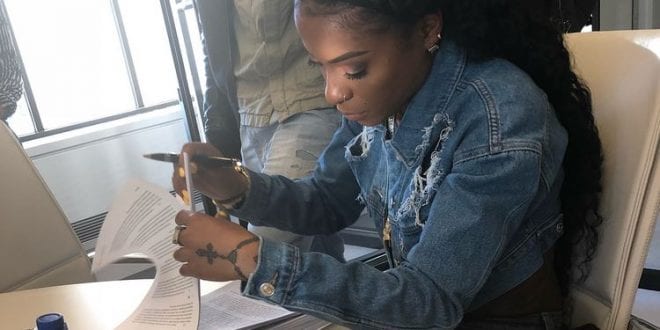 sharetweetWhatsapp
PinterestDiggLinkedinRedditStumbleuponTumblr
Share
Hood Celebrityy the Jamaican dancehall rapper moved from Portmore to Bronx New York when she was a teenager; but now she is doing well, as she is signed with Epic Records and officially became a member of their team in May.

Hood Celebrity is otherwise known as Tina Pinnock, she managed to release two mixtapes in 2017 “Walking Trophy” that went to number 27 on the Magazine Hip-Hop Airplay Chart recently, and “Can’t Believe it is Just a Her 2017 Single”. The Soundtrack for the movie “Superfly” which opened in the US by Epic included her song “Find My Way Out”. Superfly made US $ 8 million, making it the sixth highest figure earned at the box office

A number of Jamaican artistes have found great success with Sony Music’s subsidiary labels over the years, Tanto Metro and Devonte and Patra did good after they signed. We look for big things from Hood Celebrityy in the future.

Hood Celebrityy wrote the following online right after signing “If you know my story you wouldn’t hate on me 💯 god paved a way for me an everyday I thank him for that 🙏🏾 really came from the mud I came to this country at 12 years old just a little girl who wanted to reunite back with my family an live my dream. I remember when I ain’t had shit. I remember my friends traveling an I COUDN’T go no where because of my situation. Yessss I do SUPPORT “DACA” I know how those kids feel coming here as a younging An growing up to finding out it ain’t shit they could do or no where they could go 💯I know how that shit feel where everything stops at high school because I COUDN’T go to COLLEGE BECAUSE I AIN’T HAD SHIT OR MY MOM AIN’T HAVE ENOUGH MONEY ✊🏾 I know how the SHELTER feel I lived there for A year 🤷🏽‍♀️ your past an what you been through dont define who you going to be 💯 one thing my mom thought me was to always keep my head high an my dignity as a women an that ain’t go over my head. God changed my life an he can change yours. I remember when I COUDN’T get on a AIR PLANE ✈️ NOW I TAKE THE PLANE LIKE IM TAKING THE BUS 💯 I’m grateful. I’ve always been the bread winner since 17 years old. My mom worked hard as a single mom an she ain’t give up on me so I ain’t give up on her. I ain’t perfect I made a lot of mistakes an fuck ups but I’m here now correcting as i go. I just want to say thank you to my team, thank you to my family, an thank you to my friends who was there an still here supporting me as I continue my journey. Thank you to EPIC RECORDS FOR BELIEVING IN ME AN SIGNING ME LOOK NIGGA I MADE IT I GOT A LONG WAY TO GO BUT MY TODAY IS WAYYY BETTER THAN MY YESTERDAY AN MY MONTHS, days, an weeks before AMEN 🙏🏾 “A BITCH GOT SIGNED” ‼️‼️‼️‼️🏆
I’M GREATFUL 💪🏾 GOD WE DID IT 💃🏽🎥🍸 thanks to these 2 guys for believing in me since jump @callmeclass @iamshaft ✊🏾 #hoodcelebrityy #epicrecords #KSR #history #walkingtrophy 🏆⭐️ @epicrecords #godsplan”