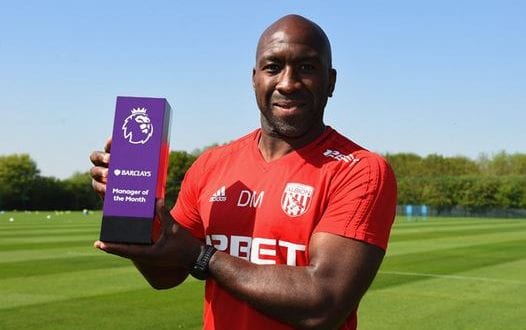 Darren Moore the former Reggae Boyz player who represented Jamaica twice in 1999 and made over 100 appearances in West Brom, is now Premier League (PL) Manager of the month for April.
His time as a manager has been dramatic, he had a 1-0 win over Manchester United that helped Manchester to seal the PL title.
Advertisement

Moore follows in the footsteps of former US National coach Bob Bradley who was Swansea City boss for a short time.
The 43 year old managed to guide WBA to an unexpected unbeaten run in April. He spoke about the unity among the team members and how it helped the players to put together a good performance on the pitch.

Even though Moore won the award, his team was relegated to the Championship, the second section in England and Wales.

Moore is the second Manager from the CONCAF. He has made Jamaicans feel so proud.