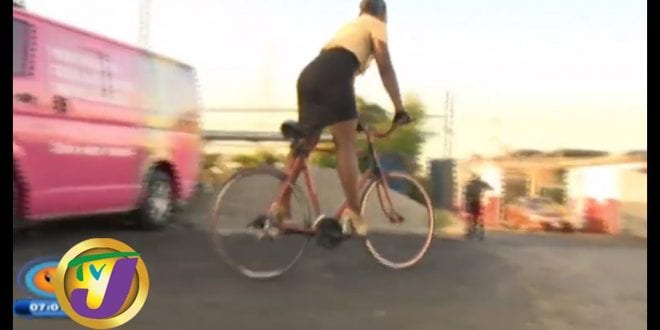 619
SHARES
sharetweetWhatsapp
PinterestRedditStumbleuponTumblr
[Sharingbuttons] Shellysha McCarthy the cycling sensation who became popular on social media last October because of the way she would ride her bicycle to and from work which is an unusual mode of transportation for females.

She was inadvertently or intentionally knocked from her bicycle on Monday, as she rode along Chelsea Avenue in New Kingston, as she made her way back to work.

McCarthy told the Jamaica Observer that, “I don’t know if it was purposeful or not, he saw it as funny, (but) it’s foolish behaviour.”.

The 40-year-old secretary, who pedalled her way to and from her workplace in Kingston, in her narrow skirts and stylish heels, said the motorcyclist who hit her, had started speaking to her as he rode beside her.

Before things got out of hand. “He was riding and talking to me, making small talk. Then, I don’t know what possessed him, he put his hand on my lower back and started pushing me. I told him to stop, because it was very dangerous,” she said.

The motorcyclist failed to heed her warnings. “I don’t know if his bike came too close to me or what, it spin me and throw me off the bicycle. A car almost run over me, but God was in the midst,” she explained.

McCarthy suffered injuries to her hand and shoulder, and significant bruising, but her helmet protected her head from serious injury, as she fell on the asphalt. She is now at home nursing injuries because of the male motorcyclist.

Since Shellysa and her bicycle became popular there were men who even proposed to her because of what she did.