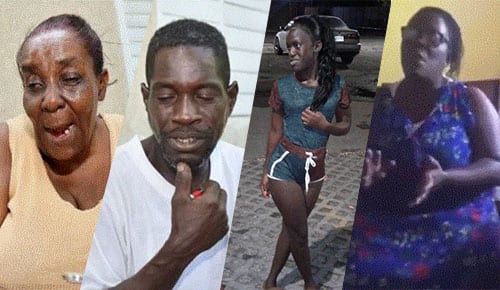 Mackerel’s Father and Step-Mother says her Mother was Careless

The Jamaica star Caught up with Mackerel’s father and Mackerel’s Step-mother on the heels of Mackerel’s telling onstage Interview.

Mackerel’s father Patrick Francis explains that Mackerel’s mother Sherlette Black sent their daughter to boarding school as little as 3years old and there was a tussle by himself and her mother to get Mackerel back home living with him “Sherlette board out the little three-year-old when she should have been living with me,” he said.

Mr. Francis states that while Ladasha was growing up “Ladasha would live with me and get settled, and then her mother would just come and take her back, and the little girl get depressed again.” Francis also went on to express that he felt down when he heard that his 12year old daughter got pregnant but lay the blame on her mother as she was not getting cared for at home “Mi did shock and feel a way say she pregnant. Her mother was supposed to be responsible for her when she get pregnant” said Francis.

Patrick explains that he has never seen his daughter’s baby father before and he is still upset with him for getting his young daughter pregnant.

Molestation Allegation
Mackerel’s mother Sherlette Black stated earlier in a video she posted online that Mackerel told her that her father Patrick molested her, Patrick responded to these claims stating that ““Mi would never ever ‘touch’ my daughter. Mi never hear my daughter say anything like that. To be honest, when the police were talking to us, they never talked to all of us together. They had us in separate rooms. Mi may black and ugly, but mi never short of a lady yet. Mi would never touch my baby” he also stated that his daughter did not say that only her mother does.

Mackerel’s father also went on to state that his daughter don’t take people man for real, it’s just a slang.
On the other hand, Mackerels Step-mother states that Mackerel’s Mother is jealous over the relation that Mackerel have with her father.

“Let me tell you this, it’s jealousy and badmind why Sherlette doing what she doing. She av issue with us because ‘Frankie’ and me deh, and mi feel like is me why she spite the likkle girl.” stepmother, Lorna Pinnock states, she as been in Mackerel’s life for over 10years.

Lorna herself also thinks that Ladasha acts the way she does because she not getting any love from her mother plus she dicloses that Mackerel’s mother tell her bad things/words at times which affects her.

WATCH: Mackerel’s Mother Responds to Onstage Interview, Tells Her Side of The Story [Video]