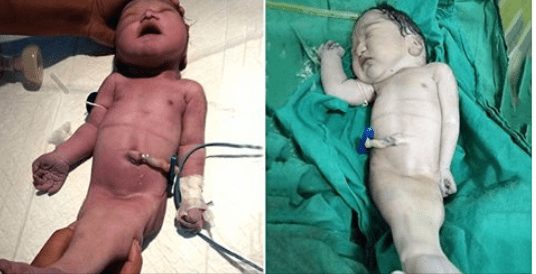 The unnamed baby, whose sex was unclear due to its underdeveloped pelvis and fused legs, suffered from a rare condition known as sirenomelia or ‘mermaid syndrome’.

Ms Bibi had been unable to afford any scans during her pregnancy and therefore only learnt about the baby’s condition when she first saw it after giving birth.

Dr Sudip Saha, child specialist at the hospital said: ‘The parents are a labour couple and had not sought proper medication during pregnancy due to lack of money.

‘Lack of proper nutrition and improper blood circulation to the baby from mother can create this kind of abnormality’.