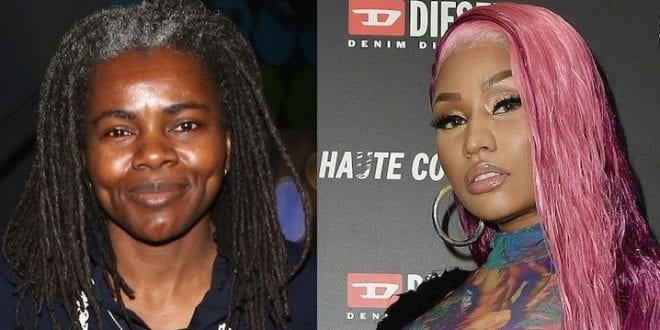 The Self-proclaimed Queen of Rap Nicki Minaj recently scored a small victory in her legal battle with Tracy Chapman. It has been a long battle since the release of her last album “Queen” in 2018.

The track that was titled “Sorry” had a sample from Tracy Chapman’s single “Baby can I hold you tonight” that she released in 1998. Nicki had to wait for the sample to be cleared, so the album was released with the song Nas was featured in was missing from the tracklist.

The song was not played while Nicki visited Funkmaster Flex at Hot 97 as she promoted the project, even though it was not on the album, because Tracy never gave permission to Nicki to use her sample.

Nicki and Flex were still named in a copyright infringement lawsuit. Even though it looked as if Nicki and the host a judge ruled in favour of Nicki on a key component that was related to the case.

Tracy Chapman had filed a motion for Nicki Minaj to turn over text messages that recorded a conversation between her and Funkmaster Flex, which would prove that she gave permission to play record that she hadn’t given permission for to play.

The judge denied the motion on Friday and Nicki didn’t need to send the messages that were requested as evidence.