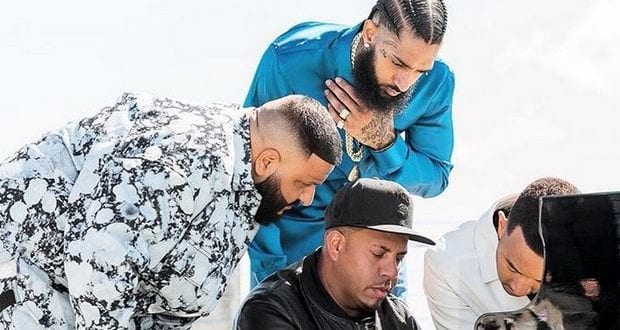 Nipsey Hussle’s final day on a video was spent with Dj Khaled and John Legend and it was uplifting and almost spiritual. They didn’t know that a few days later he would be gunned down outside his Marathon clothing store outside LA.

The song ‘Higher’ will be on Khaled’s album ‘Father of Asahd’ expected to be launched on Friday. John said the music was beautiful when he wrote a tribute tweet for Nipsey and Khaled said all the money made from the music will be going to Nipsey’s children.

Nipsey is gone too soon, it is so sad to see a hardworking Black man die like that.
The video is expected to do well as it was professionally done and Nipsey was wearing a head-to-toe blue suit.

Check out video snippet from the upcoming music video.

The 33 year old tall LA rapper was shot and killed outside of his Marathon Clothing store earlier in Los Angeles. He reportedly got several shots and was taken to the hospital where he was pronounced dead. 2 other persons were also shot and hospitalized.

One of the most talked about rappers of 2018, He’s loved by rap fans in America and around the world for his music and hussle. He was not a pop nor rap star hence most persons don’t know of the name but he was one of the top independent artistes in the world.

Many HipHop and rap critics claims that his Album “Victory Lap” should have won the grammy instead of Cardi B’s Album. He was nominated for the “Best Rap Album”.

Nipsey Hussle’s Killer Arrested
Arrested some 20 miles away from the crime scene after the police had put out a wanted warrant earlier for 29 years Eric Holder, he was on the run for 2 days. It’s not clear how the police got a hold of Nipsey’s suspected killer. Holder has since plead not guilty in Nipsy’s killing and is expected to go on trial soon.